When you ask multi-unit tenants where they store their leases, you’re likely to hear one of two answers: In a drawer, or in a box under a desk.

So it wasn’t a shock when a client told Brett Cooper and Andrew Smook of Cosmo Real Estate Partners in New York that their leases were, “in a drawer somewhere.” The client is a medical office practice with 10 locations and another five to 10 on the way.

“They’re great at what they do, but they aren’t real estate people,” Brett said. The company doesn’t have a dedicated legal or lease administration department, so they brought us in. I oversee lease management. And Andrew, who is an attorney, handles their legal work.”

Brett initially selected Yardi Breeze to run Cosmo’s back office because he thought the software would be a one-stop shop that covered all they company’s needs. However, he and Andrew were caught off guard by a surprising one-two punch.

“We quickly realized the software was overwhelming on the accounting side and lacking on the lease management side,” Brett said. “It didn’t give us the ability to put in renewal options info or option notice dates. It just wasn’t what we needed, especially in these unprecedented times when we need transformational technology.”

That’s when the partners learned about Leasecake from Andrew’s father-in-law, Glenn Levins, who was an early Leasecake customer with his company, The Phoenix Organization.

“Glenn gave me a login to his account, and I started seeing his email alerts,” Andrew said. “When I saw how the notifications worked, it was clear we needed to learn more.”

When the Cosmo team first implemented Leasecake, they planned on using it only for their own portfolio management.

“We didn’t know about the separate functionality for our tenant clients,” Brett said. “But once we found out about that option, we spoke to Yori on the customer success team, and she had us set up within a day.”

It wasn’t long before a client experienced the benefit of proactive lease management. “They had a dispute with the landlord,” Brett said. “It was something the landlord should handle, but the landlord pushed back and said it was a tenant issue. Having easy access to leases makes it much easier for us to resolve a situation like that.”

Brett said having a simple cloud-based lease-management system to easily manage leases will help Cosmo expand its business line. It’s another tool in their arsenal as they pitch to potential clients that need help with lease administration.

Cosmo Real Estate Partners is a New York City-based management company that works as a third-party manager for multi-location tenants while simultaneously building its own portfolio of retail and medical office properties.

With a team of two, principals Brett Cooper and Andrew Smook focus on efficiency, which is why Leasecake is so appealing.

“Leasecake saves us from paying for software that generates reports we don’t need,” Brett said. “The software makes it simple for us to create abstracts in a format we like and export a rent roll without pulling leases. It keeps us on top of our game.”

Prior to founding Cosmo, Andrew was an associate at Shearman & Sterling, a multinational law firm based in New York. Brett was vice president of asset management for Kimco Realty, the REIT that grew out of a company his grandfather co-founded in 1958. There's No Such Thing as a 'Regular' Report
Previous Article 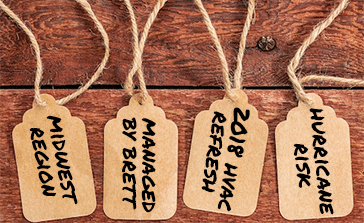 5 Ways Tagging Gives You an Edge in Business
Next Article